Who are TAB Classics?

We are a small team, dedicated to  what we do. We understand the passion and commitment that our customers put into their projects, and treat every tank as if it was our own. 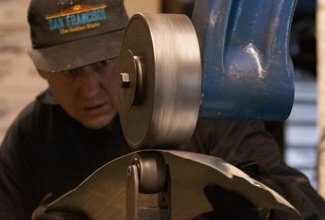 Richard has always been an absolute petrol-head who loves all forms of motorsport, and so understands what it’s like trying to track down parts for your “baby”. He has a background in metal finishing and fabricating car components, and in latter years he worked in marketing and customer services.

He learnt the skills of tank-making directly from his father-in-law, the masterful Terry Baker, leaving him able to dip into any aspect of the tank-making process. Richard helps with assembly and deals with the polishing, finishing and final packing of the products, meaning he can make sure it is all completely up to standard. He also oversees the majority of communication with customers, allowing him to ensure that everyone receives as close to what they want as possible. 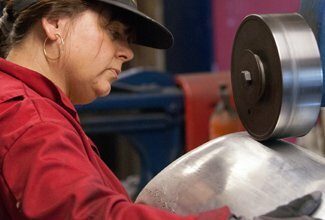 Aline spent many a year getting grubby in her father Terry Baker’s workshop, following him around and learning everything she could about motorbikes and fuel tank fabrication. She now puts that knowledge to use by doing most of the shaping work with hammers and dollies, and is a master of the English Wheel. Using these basic tools and her artistic eye, Aline is able to turn a flat sheet of aluminium into a beautiful petrol tank in a matter of hours. Aline has ensured that her father’s legacy continues in the traditional techniques and tools she uses as well as the artistry that she creates with them.

Mark came to TAB II Classics in 2013 through his father Colin Purslow, who used to race one of Terry Baker’s TAB Honda race bikes in the 1990s. Mark soon proved himself indispensable by becoming as good a gas welder as Terry had been, something most people find difficult to do due to the nature of aluminium. Mark is another petrol head who races road bikes and he even won the Manx Grand Prix in 2015. He now races a TAB Honda – a true homage to Terry’s design.

About T.A.Baker and TAB II Classics

Back in 1972 when he was just a mechanic working in the East End of London, Terry Baker became frustrated at not being able to find a light-weight fuel tank for his racing motorbike. Being the doggedly determined bloke that he was, he decided to give it a go making one himself. For most people this would have been a challenge, but Terry was a master artist with an eye for all things motorcycle, and so just making the one for himself was not enough. He saw it as his mission to make tanks for every bike out there at the time, and so was born Terry’s tank making business.

For over 38 years he mastered the techniques needed for making tanks and passed on his skills to many a tank-maker out there today. Terry recognised that the old methods were the best, and so took the time to teach himself gas welding and use of the English Wheel. This meant that all of his tanks were made using traditional time-honoured methods. Over the course of his career we have calculated that he must have made over 20,000 tanks.

In his day Terry was also a competent bike racer, and a huge fan of the Honda K4. He realised early on that the standard K4 frame was never going to be competitive against the Nortons for example. He took to designing and producing his own super-lightweight K4 frame known as the TAB. The TAB frame is still a favourite amongst the current day classic bike racers. Was there no end to this bloke’s skills?

Sadly, Terry was diagnosed with cancer in the summer of 2009. In the hope that his hard work had not been in vain he gave his tools, patterns, and equipment to his son-in-law Richard Phelps and his daughter Aline Phelps. Aline had grown up around her dad’s work, and so had picked up many of his skills during her childhood years – it seemed natural that his legacy should pass down into her and her petrol-head husband’s capable hands. In his final few months Terry endeavoured to teach Richard and Aline everything he could about gas welding aluminium, using the English Wheel and fabricating tanks. Up until the very end he would be calling Richard up to his bedside to recite facts and figures about the numerous bikes he had worked with over the years.

Terry’s illness took a turn for the worst and in early 2010 he died, leaving his company in the hands of Aline and Richard. In the years since his death Richard and Aline have done justice to his work by rebranding the company as TAB II Classics and honouring his wishes to continue using traditional manufacturing techniques.

Working with Terry’s 38-year expertise backing them up, TAB II Classics has truly become an international name by providing quality and traditional petrol tanks to people all around the globe. They pride themselves on handmaking each tank individually, meaning that each one is slightly different and unique. As Terry Baker used to say, “It’s more about art than engineering mate!”

Working out of their workshop in West Wales, UK, Richard and Aline have not strayed from Terry’s traditional techniques and having trained and employed a fabricator/welder Mark Purslow, continue to use basic tools like the English Wheel, gas welding and hammers and dollies. As a result, each tank takes up to 30 hours to make, and ensures that the quality remains high. TAB II Classics also aims to make the tanks as easy to fit as possible by working closely alongside specific bikes, which also ensures that each tank is individual and suited specifically to the customer’s bike.

Drop us a line anytime

Call for a chat

Come and see us